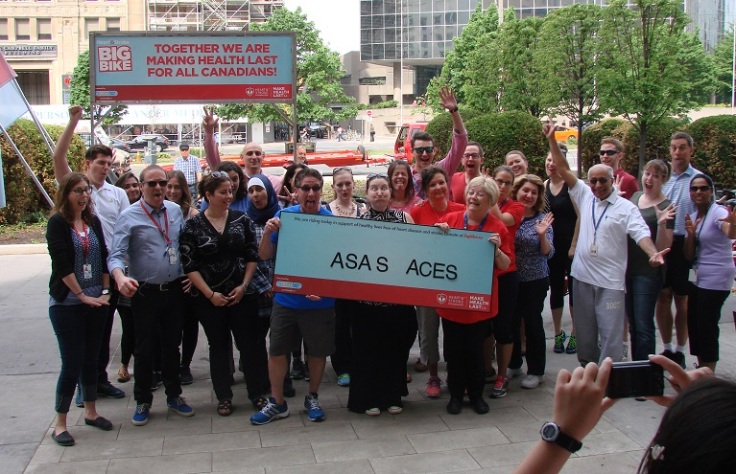 This year our Big Bike team, led by 10 year captain, Jennifer Hardaker rallied hard and fundraised $6,235 to support the Heart and Stroke Foundation with our ride up and down University Avenue.

The ride brought out nearly 30 members of the Laboratory Medicine Program (LMP), all of which pedaled the Big Bike from the front of Toronto General Hospital, all the way around Queens Park and back to our starting line. We were the first team to kick off the annual Big Bike ride, and even though there’s no race or contest involved, I’m pretty sure we were the fastest and loudest team out there.

On top of that, all the donations received from friends and family gave our team VIP status, making us Very Important Philanthropists, and everyone who participated received a commemorative VIP medal.
Having something to remember this year’s race was especially significant because our long-time team captain, Jennifer Hardaker, who has been with the University Health Network for almost 50 years, has announced her retirement for the end of August. Jennifer has participated in the Heart and Stroke Foundation’s Big Bike for 14 years now, and has captained LMP’s team for the last 10. It was an emotional day for many who have participated with Jennifer over the years, but luckily there has been some campaigning to get Jennifer back on the bike next year as a rider.

When addressing the team after the ride, she said, “Thanks to all of you for making this year’s Big Bike such a great success. You made my job easy by being so willing to join the team.” She went on, “I know that you will continue the tradition that we have all enjoyed and encourage new colleagues to take part.”

Well done to everyone who took part in this year’s Big Bike, and a big thank you to Jennifer!