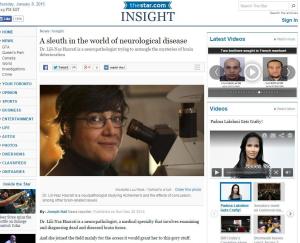 Recently. LMP’s Dr. Lili-Naz Hazrati was named one of “10 Torontonians to Watch in 2015” by the Toronto Star.

Called a “sleuth in the world of neurological disease,” Dr. Hazrati’s recognition focuses on her work as a neuropathologist working to “untangle the mysteries of brain deterioration.” The article speaks to Dr. Hazrati’s work that focuses on Alzheimer’s disease and concussions suffered during athletics that lead to Chronic Traumatic Encephalopathy (CTE), through the Canadian Sports Concussion Project.

As well, Dr. Hazrati is also recognized for her outreach efforts with different groups of patients who suffer from these conditions, who are eager to have answers and have agreed to donate their own brains, or those of their loved ones, to her medical research.

Part of Dr. Hazrati’s research that is highlighted in the story centres around her theory that the progression to the advanced forms of both Alzheimer’s disease and CTE might follow similar paths and that there is some sort of common cause for both diseases. 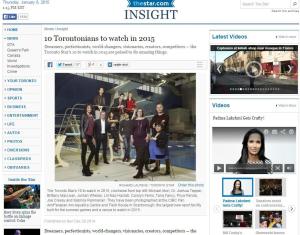 Currently, her research has shown that “the same glia cell receptors that were activated by injury and inflammation in concussed human brains could be triggered to kick off the degenerative process in mice models of Alzheimer’s disease.”

Thus, “the telltale signs of Alzheimer’s disease — the so-called plaques and tangles that stuff the withered neuron cells of its victims — may not be a cause but an end product of changes that originate in surrounding glia cells.”

Dr. Hazrati’s continued research around the triggering receptors within these supporting cells may lead to further studies around potential sources of biomarkers for early diagnosis, better assessments for various risk-levels and the development of potential new drugs and therapies to combat these debilitating diseases.

Read more about why Dr. Hazrati is a Toronto Star pick for one to watch in 2015 HERE.

Check out of the other nine Torontonians HERE.