The rain was pouring down and the puddles were deep enough to soak your ankle, but the Lab Lifesavers team was ready, confident and looking forward to the challenge. Joining almost 4,700 other participants, the Lab Lifesavers were taking part in the 10th annual Weekend to End Women’s Cancer in support of the Campbell Family Institute and the Princess Margaret Hospital 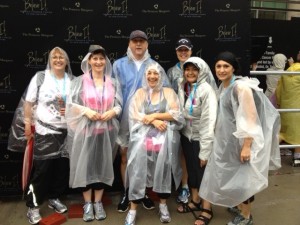 The team was dripping wet from the rain on Saturday morning, but spirits were high as they left the starting line at the Prince’s Gates at the Canadian National Exhibition and began their 60 km trek from the lake and made their way up to Downsview Park, and then back again on the Sunday. The Lab Lifesavers team consisted of Dr. Sylvia Asa, Yvonne Bedford, Brad Davis and Michele Henry from administration, Marjan Rouzbahman from Pathology, Sally Balmer and Stephen FitzGibbon from Blood Transfusion, Dianne Chadwick from BioBank, Shawn Brennan from Cytogenetics and Nayana Sondi from LIS – together the Lab Lifesavers raised $32,620 in the fight against women’s cancers, coming in at #43 of 612 corporate teams.

According to the team, Day One was the toughest due to the heavy downpour of rain. They were all decked out in rain ponchos, but their shoes were quickly soaked due to some ankle deep water that had flooded near the Lakeshore.

While the majority of participants walked the first 32 km on Day One, Yvonne broke from the pack and ran the entire thing on the first day – all 32 km – and made it up to Downsview Park before some of the organizers.

The walk also took the team right past our “home” by heading up University Ave and past Toronto General Hospital and the Princess Margaret. Dianne Chadwick explains that “our spirits remained high, particularly when we saw familiar faces including Drs. Tak Mak and Chris Paige who were cheering us on in front of PMH.”

Dianne adds that “one of the most inspiring moments was seeing Kitty, a 99 year old walker all in pink, wearing a sign that read ‘I’m 99 and feeling fine!’ We were thinking ‘I’m feeling 99 and not so fine,’ but if she could do it, so could we.”

This was the first year that the labs participated as a team, but for the past ten years, the Weekend walk has raised over $120 million for the Princess Margaret. These donations have gone to good use as there have been groundbreaking strides in the fight against women’s cancers and thousands of lives have been saved over the years. 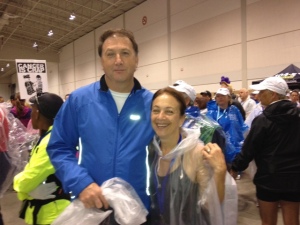 Stephen FitzGibbon says this was the first time he participated in the Weekend to End Women’s Cancer’s event. Stephen was “impressed by the enthusiasm and determination that all of the walkers exhibited throughout the weekend. I saw walkers suffering from blisters, pulled muscles, etc. who bravely carried on to the finish line each day. Despite the poor weather and the aches and pains, the walker’s spirits remained high.”

For Stephen, the event was very personal as he “walked in support of my wife Loraine. Three years ago she was diagnosed with breast cancer. She underwent two surgeries, surgical complications requiring extensive wound care, followed by almost a year of chemotherapy. Throughout it all she remained upbeat, never complaining about the pain or nausea that she suffered from. I hope that next year we can organize an even larger team to participate in this event.” 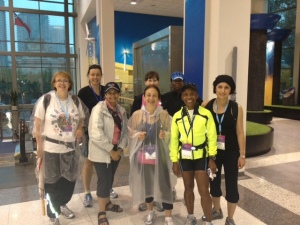 According to Sally Balmer, her reason for walking was also personal, “I walked for Mary Guiniaoan.  Mary worked in blood bank up until she died in April 2011 and her courage throughout her illness with cancer was amazing and it inspired me to join the walk. I thought of her many times during the walk when I needed courage to go on and her memory got me to the finish line.”

Brad Davis pointed out that “the walk provided just another example of why lab people are #1… I think a lot of us signed up (or allowed ourselves to be drafted), not knowing how we would complete the walks – but knew it was something that had to be done. It is very much like the challenges our staff face every day…we just figure it out!!”

He added that he “enjoyed the opportunity to have long chats along the away about everything – and seeing others walking, even patients in treatment, along with a 99 year old lady walking – it was just purely inspirational!”

According to Michele Henry, “I’ve volunteered at the event before, but it was a whole different experience doing it as a walker. I participated because the Lab Lifesavers was a great team event, but I mostly walked in honour of my mom who was treated at PMH for gynae cancer. If she could have radiation every day for months, I could walk 60K for a great cause.

She added that “hearing the stories of fellow walker and the support from the community was overwhelming, families outside with all their children in pink offering food water and coffee with Baileys was truly inspiring.  Whether we ran or limped across the finish line it was a great accomplishment for all.”

Shawn Brennan explained how “it was a fun walk in spite of the rain with no bumps or blisters – hurray!”

On Day Two, the weather was much better for the walkers as the sun was out and the temperature was comfortably cool. The trail went through Humber Park and Bloor West village and along the boardwalk on the lake. When the team reached the 60 km mark at the CNE, supporters were lined up on both sides cheering everyone on. 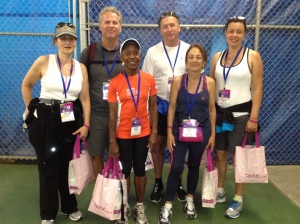 The Lab Lifesavers team was led by Dr. Sylvia Asa, Medical Director for the Laboratory Medicine Program and she is incredibly proud of the team, the funds the team raised for the Princess Margaret, and seeing how many people came together to support the fight against cancer.

“Walking with our team was very inspiring – and seeing all the other teams and groups from other organizations and businesses really made us feel like we were part of a big movement, making a difference in the fight against cancer,” said Dr. Asa.

“It was great to do this as a team, to talk with one another and really get to know each other. We were also encouraged by the route volunteers, some of which dressed their bikes – or themselves – in glaring pink bras filled with balloons to have a little fun along the way,” she added. “We were also pleased to see Toronto unite for this great cause as a community; seeing the families with snack stations and water, walking past little kids on their lawn handing us treats. It made us feel like we were all in this fight together.” 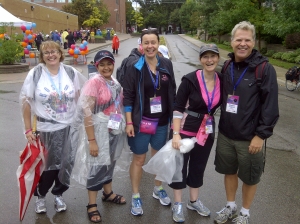 Dr. Asa says that, “next year our Lab Lifesavers team will be bigger, our team will raise even more money and we will make an even bigger impact in our fight to conquer cancer in our lifetime.”